Connector state appears to be doubled up

Hello @cornjuliox, could you please tell me what version of Airbyte and connectors you are using, and what your system setup is?

Sure - Airbyte version 0.39.32-alpha, the connectors that are affected are all custom. I don’t know much about the setup right now because we’ve got another guy handling it; all I know is that its running on a Docker cluster somewhere in AWS.

We have another incremental sync failing today whose state looks just like the above, and its for a custom connector that I haven’t touched in a while; which suggests that the issue might be with Airbyte itself. Just thought I’d put that there in case it helps with the investigation 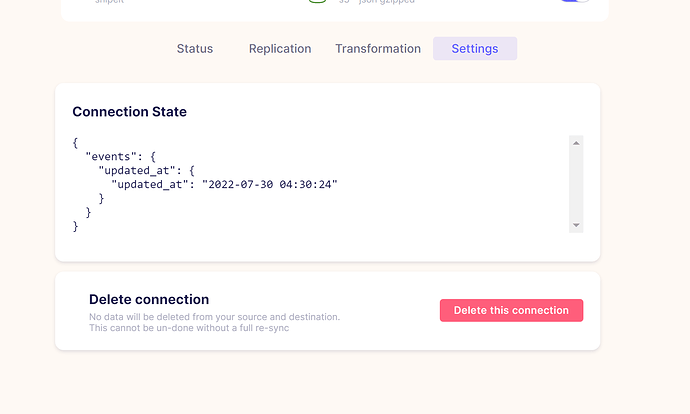 Could you please give me the logs for both syncs? That’ll help me debug this quicker!

For the first connector:

I see that you’re getting a TypeError: expected string or bytes-like object. I think the problem is indeed in parse_response, could you check if the returned object looks different depending on the stream_state? Also, could you look if the recorded_state is being set correctly on consecutive syncs at recorded_state = pendulum.parse(recorded_state[self.cursor_field])? It would be helpful to see the connector schema if possible.

For the second connector:

Could you please tell me what environment you’re running this in, and also update Airbyte to the latest version.

Both connectors actually run fine locally - its when I run them through airbyte that the problem occurs, so it’s difficult for me to replicate accurately on my machine

Basically what I see happening is that recorded_state[self.cursor_field] is supposed to return a string representation of a datetime, but ends up returning another dictionary containing {updated_at: <timestamp>} causing pendulum to fail.

As for our environment I’m waiting for the guy handling devops to respond (we are in different timezones) so I can’t provide much new information; was there anything in particular you wanted to know about our environment?

Yes, I’d love to know the OS Version/Instance and the Memory/Disk used for this.

Sorry for the delayed reply, I’m still not getting notifications from Discourse.

Not exactly - when I develop the connectors I test them by doing python main.py read ....., using the --state command line option to simulate a stored state, and once I’ve verified that it outputs without error I build the image and run it through the web UI of an instance of Airbyte hosted locally on my machine. That’s what I mean when I say I’m running them through Airbyte.

Our second connector, on the other hand, has been in “production” (on an instance of Airbyte running in EC2) for a while without issue, but is now experiencing the same issue with the stored state.

I’ll have to get back to you on the EC2 instance specs though.

I see, thanks for all the info! Did this issue start happening recently? Were you able to upgrade Airbyte to the latest version?

Could you share a repo of the connectors with me so I can take a look at the code?

Hello! Sorry for the delay! Here you go.

Could you please upgrade Airbyte to the latest version? We are now up to 0.40.0; I would like to see if this has an impact on the issues you are encountering. Here’s the upgrade guide:
https://docs.airbyte.com/operator-guides/upgrading-airbyte/

Sure I will ask (our instance is managed by someone else so I have to put in a request for it).

Is there any way to “clear” the state from the UI? I figure I will need to do that before it will start working again, because if the affected connectors read the “doubled” state as-is they will fail again.

Hi! The team was doing off-site meetings last week, so I apologize for the delay. I’m looking into how you might. clear the state without deleting the connection, so hope to have some ideas on that for you soon.

Hi, is there any update on this? We’ve got another connector that’s no longer working as of today because the “state” is all messed up. Is there a way to reset it without clearing all the data?

Yes - you can update the state of the connector through the API:
https://airbyte-public-api-docs.s3.us-east-2.amazonaws.com/rapidoc-api-docs.html#post-/v1/state/create_or_update

Let me know if this works for you!

OK thanks! I’ll give this a try. Is there any word as to what’s causing it to be like this? Is it an error in the way I’m using state in the connector, or something else?

I think you were onto the problem here - “I see happening is that recorded_state[self.cursor_field] is supposed to return a string representation of a datetime, but ends up returning another dictionary containing {updated_at: <timestamp>} causing pendulum to fail.”

As these are custom connectors and I don’t have access to the full code, I am not able to debug them as well as I could if these were public. If you are able to publish them, you could raise an issue on GitHub to get help with debugging this!

Connector state appears to be doubled up Connector Development

Thank you for linking those again! I think the best bet would be to bring this over to GitHub at this point, submit the connector as a new source and create a PR. Then someone from the team would be able to help you debug this in the review process!