During the deployment on AWS EKS, few pods are running/ Pending but bootloader got errored out. First snapshot also have airbyte-db configuration.
I am not getting which configuration I should change?

Below is the error 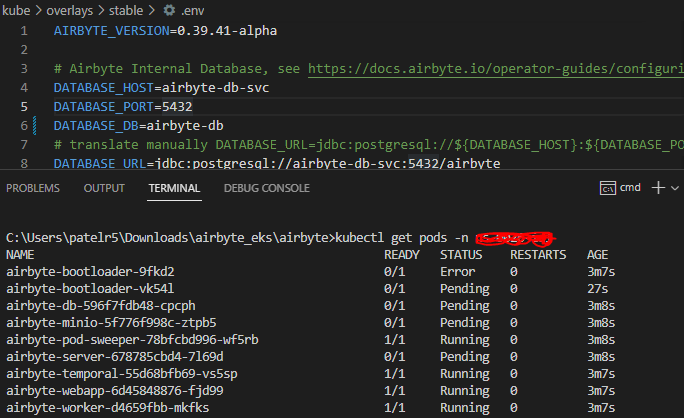 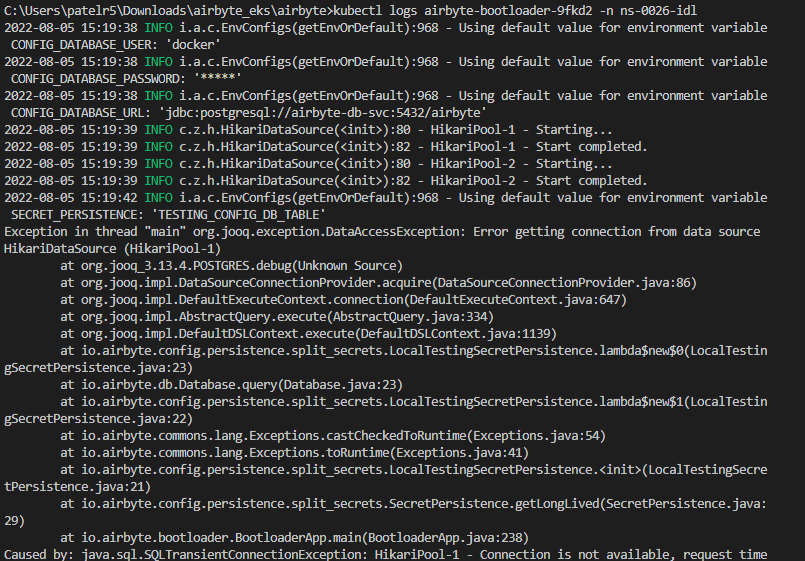 Similar error as mentioned in thread Failed to connect to external postgres DB.
All pods are in same VPC under same cluster

All default setting is used except namespace in kustomization.yaml.

Hello @RahulPatel, could you tell me what connectors/versions you are using? I found an open issue that might be related, but need a few more details:
https://github.com/airbytehq/airbyte/issues/13911

It’s not connector issue, I deployed Airbyte on AWS EKS. Deployment is completed but bootloader pods are not getting up. Bootloader service is not able to connect with airbyte-db.

I see! You’re not using helm, correct? Could you provide the full logs?

Hi @natalyjazzviolin ,
I work with Rahul and attached is what you asked for.

All Pods after deployment.

Thanks, @suman9730! And to double check: you are not using helm?

Yes @natalyjazzviolin, we are not using helm.

Gotcha! This is redundant, but just in case - could you recheck the port the database is using? I’m looking further into this, and if we don’t find an evident solution today/tomorrow, I’ll escalate it to GitHub.

We are using the default settings without any change. (See attached)
env.txt (2.4 KB)
secrets.txt (224 Bytes)

If you were using this doc for setting up the database, the port needs to be 3000 and not 5432:
https://docs.airbyte.com/operator-guides/configuring-airbyte-db/#connecting-to-an-external-postgres-database

We are using On Kubernetes (Beta) | Airbyte Documentation to deploy the default installation on AWS EKS.

Getting the same error, even after changing the port to 3000

@natalyjazzviolin Do you have any working template and setting which works for you on AWS EKS since default configs templates are not working.

@RahulPatel I’m looking into it, should have an update for you soon!