Struggling with S3 to Snowflake connection

One potential issue might be that there are a lot of small files. Maybe this is causing some problems.
Number of files per folder (i.e. per source) = 79,323 with total size 2.1 GB

The syncs have been running for a couple of days without success, which seems odd given that the size is not that big and there are plenty of resources on the EC2 available (CPU, memory and disk space usage are all low).

Hi @kyle-mackenzie-indee, sorry to hear you’re having all these issues!

I think these types of errors may happen if Airbyte isn’t authenticated correctly, I know it’s a super simple ask - but could you try logging out & restarting Airbyte?

I’ve recreated one of the sources and connections and updated my original post with the early status logs, though no errors yet.

Below is the result in chrome dev tools console of trying to load the status logs of one of the others. First two in yellow are just my extensions I think. 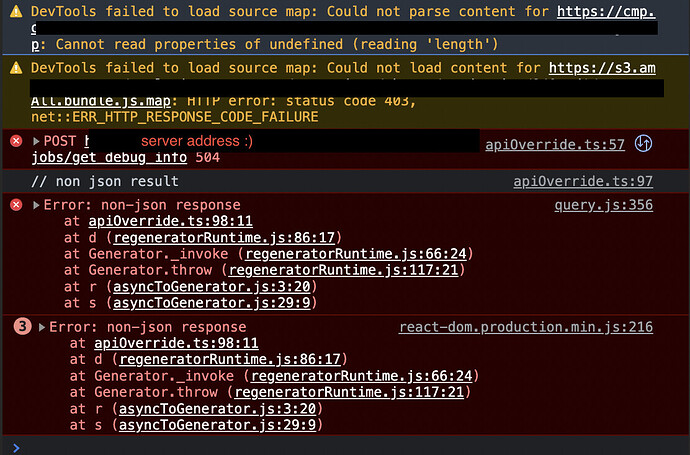 Maybe relevant, maybe separate. But if I upgrade a connector and/or airbyte version, do existing connectors, sources and destinations automatically start using the new versions, or do they need to be recreated each time?

This looks like a connection issue related to the health of your deployment. A few ideas:

What would a redployment involve? Simply restarting the docker-compose (as with an upgrade), or a fresh install, wiping everything on the EC2?
I’ve done the former without success.
If the latter, is there an easy and clean way which keeps the existing sources, destinations and connections?

I tried recreating the connector also. Seems to be running but is incredibly slow. 2 days to do 19MB

Also tried with the longer timeout, but the issue at the moment seems to be the incredibly slow speed (possibly does hit timeout eventually)

Sorry to hear you’ve had to switch to another solution! If you are still open to debugging this, there are several options that can be tweaked in the S3 source connector that might be causing errors:

If you have time to upload an example of the data you’re sourcing from S3, that would help!